“Thanking us is one thing, helping is another” – Unpaid carers react to PMs #CarersWeek comment

Last week was #CarersWeek, the annual campaign to raise awareness of caring and highlight the challenges unpaid carers face.

“Mr Speaker, this week is Carers Week, and I’m sure the whole House will wish to join me in thanking care workers and everyone caring for family and loved ones. Their selflessness and devotion to helping others is an inspiration to us all.”

On behalf of all the organisations involved with #CarersWeek this year, we want to thank the Prime Minister @BorisJohnson for talking about the essential role unpaid carers play at the beginning of Prime Minister’s Questions today. Let’s all #MakeCaringVisibleAndValued. #PMQs pic.twitter.com/80KORIaySb

However, many carers have reacted to this statement, calling for more representation of family carers and a clear distinction between paid care workers and unpaid carers. The carer community is once again feeling undervalued and invisible. 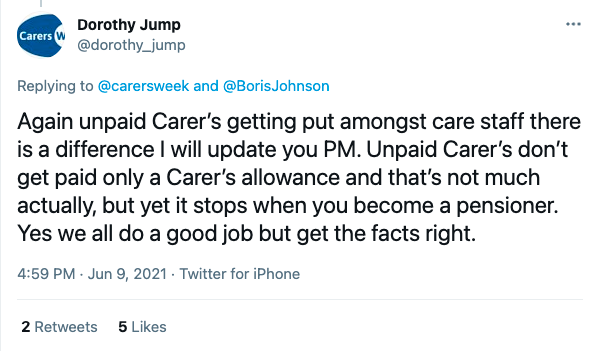 Another Twitter user also expressed their frustration with the muddling together of care workers and unpaid carers, asking whether or not the PM even knew the difference.

This year, the aim of carers week was to Make Caring Visible and Valued, bringing together organisations and individuals across the country to recognise the contribution unpaid carers make to families and communities throughout the UK.

For the 6.5 million people in the country currently looking after a family member or friend, being a carer isn’t just for Carers Week; it’s 24/7, 365 days of the year.

Unpaid carers have saved the government £132 Billion during the pandemic by looking after their loved ones during a time that has seen social care teams stretched beyond their limits. The number of social care professionals has dropped drastically as staff take time off or decide to leave the profession due to work-related stress. This leaves unpaid carers in the unfavourable position of having to pick up the slack at a time they themselves need the additional support.

And a new report released during Carers Week reveals that 72% of carers have not had any break from their caring role at all. What’s more, a third used the time off to complete practical tasks or housework, and a quarter to attend their own medical appointments.

Six charities (Carers UK, Age UK, Carers Trust, Motor Neurone Disease Association, Oxfam GB and Rethink Mental Illness) called upon the UK Government to provide £1.2 billion funding for unpaid carers’ breaks so that those providing upwards of 50 hours of care can take time off for their own health and wellbeing.

Other political leaders and figures spoke out during Carers Week, with Jeremy Corbyn taking to Twitter to spotlight unpaid carers and young carers:

It is wrong that the largest workforce in the UK – 13.6 million #UnpaidCarers who save taxpayers billions – receive no wages, time off or pension. #YoungCarers struggle at school & adults lose careers & suffer health & financial problems. #RealCarersWeek #Carers #VisibleAndValued

Meanwhile, Liberal Democrat leader Ed Davey – a carer for much of his life for his mum and nanna when he was younger and now for his disabled son – discussed the feelings of frustration, added pressures of the pandemic and utter exhaustion experienced by the carer community in the UK:

“This week is Carers Week, which means government ministers will suddenly remember we carers exist and post messages of support on social media. But judge them by their actions throughout the year rather than hollow messages.”

Under the hashtag #RealCarersWeek, carers have been sharing their opinions on the much-needed changes needed to improve carers lives.

Katy Styles, a carer and founder of the We Care Campaign that strives to value the UK’s 7 million unpaid carers, created a Real Carers Week bingo card collating all the phrases and empty gestures carers frequently face.

Have added all the latest phrases given to our bingo card. Thank you so much! Enjoy #RealCarersWeek! Off to be serious now… @Carer49 photo op https://t.co/FoPPnQGmCc pic.twitter.com/A7d8MBsd0V

Following on from Carers Week 2021, we’re creating a series of interviews “I’m more than a carer”, exploring the real thoughts and feelings of family carers in their own words. We want to hear your experiences so other carers can understand they are not alone.

This website uses cookies to improve your experience while you navigate through the website. Out of these cookies, the cookies that are categorized as necessary are stored on your browser as they are essential for the working of basic functionalities of the website. We also use third-party cookies that help us analyze and understand how you use this website. These cookies will be stored in your browser only with your consent. You also have the option to opt-out of these cookies. But opting out of some of these cookies may have an effect on your browsing experience.
Necessary Always Enabled
Necessary cookies are absolutely essential for the website to function properly. This category only includes cookies that ensures basic functionalities and security features of the website. These cookies do not store any personal information.
Functional
Functional cookies help to perform certain functionalities like sharing the content of the website on social media platforms, collect feedbacks, and other third-party features.
Performance
Performance cookies are used to understand and analyze the key performance indexes of the website which helps in delivering a better user experience for the visitors.
Analytics
Analytical cookies are used to understand how visitors interact with the website. These cookies help provide information on metrics the number of visitors, bounce rate, traffic source, etc.
Advertisement
Advertisement cookies are used to provide visitors with relevant ads and marketing campaigns. These cookies track visitors across websites and collect information to provide customized ads.
Others
Other uncategorized cookies are those that are being analyzed and have not been classified into a category as yet.
SAVE & ACCEPT
Powered by